Hey jammers! It is ipod1m and Coolmoshi3211 here! I will be ruling over this blog from now on. UPDATE 7/15/14 ipod1m is back, so WE will be admins of the blog XD Coolmoshi has buddy space so go ahead and buddy her! Make sure you come on daily to see the latest news! ipod1m and Coolio.

This may sound really weird and lame, but do you know creepypasta? If not, I will tell you the story. SO it is this weird, and really really really scary thing in animal jam. Do you all remember the time when we jammers got the message "We found some pesky phantoms, so log on later" or something? That was like sometime after I quit AJ, and came back. ( That's a long story xD.)

Now back to Creepypasta, you all know that lame rumor about breaking the ice on Animal Jam? Some jammers who really believe that have tried it out. So when they do that, you get free membership (people say). And Jammers who will not buy membership try it out. This is the story of Creepypasta, and many jammers have experienced it, and there are many versions. This is the common version, and I DO NOT DARE YOU TO TRY IT!!!!!

The story:
Well before that, I've not tried it, and it is a summary of what happened to someone, and I'm putting my animal in their place...my friend has experienced it!!! So she told me to write it.....

I was at Jamaa Township, listening to people say "What for fox hat" and "if you like me,
say "i"" I heard one particular person say that lets break the ice in Mt. Shiveer. I usually
never listen to them, nor break the ice, because I knew this was a lame rumor. Then I
just went to Mt. Shiveer, and was surprised to see 20 jammers jumping. Almost all were
non-members, who wanted free membership, and the rest were members, trying to become
rare. I started jumping, and other jammers acted really immature, like saying "I'd report
you if you don't jump." Then I just kept jumping, and suddenly the ice broke. Remember,
I was not in this. This was experienced by my friend. I never knew the ice would break, and
I was really excited. Then I was so happy that I had broken the ice. I noticed my animal
fall, and it fell into Deep Blue, or some ocean. My animal was gasping for breath.
After the whole scene, some weird earsplitting noise came from my speakers. It was
So loud. I tried to turn off my speakers, but I couldn't. Then a word appeared on the screen
which I forgot :PPPP. Then tentacles, which were legs of phantoms got hold of the
legs of my animal. Then my screen faded to black...............

Email ThisBlogThis!Share to TwitterShare to FacebookShare to Pinterest
Labels: Creepypasta

Search this Blog for:

How many jammers visited? 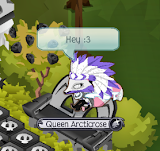 I am the creator of Animal Jam Secrets and News!

I am an author of AJSN and U will see my inner craziness!

Click here to know how to get AJ membership